What health insurance plans sold inside AND outside the exchanges must cover and who will pay for it all.

Starting in 2014, the “Patient Protection and Affordable Care Act” mandates that all Individual/Family and Small Group policies sold inside AND outside the new “Health Insurance Exchanges” must include a core set of “Essential Health Benefits” or “EHB’s”. The December 7th 2012 proposed ruling from the Health & Human Service Department directs each state to designate a “Benchmark” health insurance plan that all other major medical plans sold in that state must conform too in design. As of the December 26th 2012 deadline, 22 states have failed to designate a ‘Benchmark Plan’. So, those states (Illinois is one of them) will be required to use the biggest seller in the small-group market in their state as their “Benchmark” plan. In Illinois, that plan is the Blue Cross Blue Shield Blue Advantage Entrepreneur plan.

This is my favorite Small Group plan in Illinois. In fact, nearly all of my small group clients in Illinois currently offer this plan to their employees today. Why? Because it is very rich in benefits. Now, the ONLY way their employees can afford to have this plan is because their employer subsidizes all or nearly all of the premium for them as an added employee benefit. And, using archaic laws passed during WW2 the employer gets to deduct this cost outlay from his tax burden. Since Individual and Family plans (which are not subsidized by an employer) must now conform to the rich benefit structure of these far more expensive Small Group plans, health insurance premiums for individual and families must increase and they will do so EXPONENTIALLY. Most especially since these plans must also conform to the other PPACA mandated benefits outlined in great detail here. Some of which have already been implemented and have played a major role in inflating health insurance premiums to their highest point in recorded history. Resulting in the demise of more than 20 health insurance carriers since the passage of the PPACA on March 23, 2010.

This is why the Kaiser Family Institute reflects an average annual premium for a family purchasing a ‘Qualified Health Plan” to be more than $14,000 a year. Worst part, these consumers will not see this true cost of their ‘Government approved” health insurance because the few, the proud, the 53% of us who still pay income taxes will ASSUME THE ROLE OF THEIR EMPLOYER by subsidizing the majority of the premium for families making up to 400% above the current Federal poverty level. This is why the “LIV’s” – Low Information Voters – will assume that Barack Obama magically made health insurance cheaper. In reality, the person footing the bill for this new and largest entitlement in U.S. history will once again be the few, the proud, the 53% of us who still pay income taxes. And, unlike employers, we will not receive a tax deduction for doing so. If you are a taxpayer, do you know how much you will be paying to subsidize the health insurance premium for millions of Americans who are and who are not poor? Click here. To see the plan that qualifies as a “Benchmark” plan in your state click here. 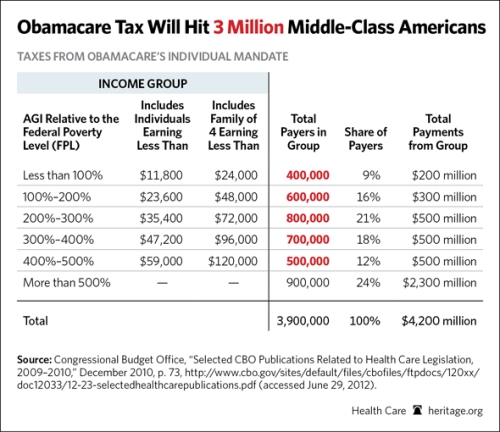 The worst part about all of this is the fact that as we expand a massive new entitlement to Americans who are and who are not poor, we divert and exhaust revenue that should be going to help those within our nation who are truly indigent. For it is these Americans who need quality health insurance coverage the most. Sadly, even though the President promised “affordable health insurance for all“. These Americans will not be carrying a Blue Cross, Humana or United Healthcare card like other Americans. They will instead receive a government Welfare program called Medicaid. How many Americans will the PPACA add to Medicaid? 17 million according to the CBO.

As many studies completed by organizations like Johns Hopkins, the Journal of the National Cancer Institute, Columbia-Cornell, the University of Pennsylvania, the University of Pittsburgh and the American Academy of Cardiology have revealed. Medicaid is the worst and most dangerous health care program ever devised by man.