Actual “affordable care” is coming soon thanks to President Trump

The next likely chance to achieve any kind of legislative change to the ACA (Obamacare) will be on November 6, 2018, which is the midterm election. If Republicans then have enough Senators who are actually willing to cast a yes vote they will then deliberate throughout 2019 until the last date to use the Budget Reconciliation process (requiring only 51 votes). Since it is unlikely that Republicans will achieve a 60 vote majority in the U.S. Senate, they will have to rely once again upon Reconcliation. The final date to pass legislation using Reconcilation is September 30, 2019.  A month later, the next annual ACA open enrollment period begins again. There will be no changes to health care policy until that ACA open enrollment period ends on December 15, 2019. This means the earliest we might see legislative changes to the ACA will be early 2020.

Now for the GOOD news

The good news is that like his predecessor, President Trump also has a “pen and a phone” and he’s been using them. On October 12, 2017 he signed this executive order which was designed to restore consumer choice in the non-ACA marketplace and to spur competition “across the United States”.  After considerable hand wringing from regulators and opposition groups, H.H.S. finally issued a final rule pertaining to the President’s executive action on August 3, 2018. This final rule makes two important regulatory changes. Both will become law on October 2, 2018. On that date, non-ACA Short Term health insurance plans will once again provide consistent uninterrupted health insurance coverage for up to 364 days. This is a very welcome change since our prior president reduced the amount of time consumers could own non-ACA Short Term health insurance plans to a maximum period of 90 days.

This action by former president Obama exposed consumers to the additional risk of not only facing up to four separate deductibles in one year but also facing the risk of not qualifying for a new 90 day policy due to a preexisting condition. This is true because non-ACA Short Term health insurance policies do not cover preexisting conditions nor do they cover other ACA mandated benefits such as drug rehab therapy and mental health parity. As such, they are much less expensive than ACA qualified health insurance plans and are very popular among the millions of Americans who do not qualify for health insurance subsidies. President Trump’s executive order also requires that these plans be renewable for a period of up to 3 years.

Unfortunately, Illinois legislators are trying to stop President Trump’s reforms to the non-ACA Short Term health insurance marketplace. If successful, Illinois consumers will continue to risk paying up to four deductibles in one year. The bill that stops President Trump’s reforms is HB2624, which passed both of our chambers at the end of May, 2018 and was sent to Governor Rauner in late June. The amended version of HB2624 limits non-ACA qualified short term health insurance plans to a maximum duration of less than 181 days and it prohibits renewals. HB2624 also restricts insured members from purchasing a new short-term plan from the same health insurer within 60 days of the termination of a previous short-term plan. This will further restrict consumer choice and increase out of pocket costs exponentially for Illinois consumers seeking to escape from Obamacare. Please CALL Governor Rauner’s office now and ask him not to sign HB2624.

THANK YOU Governor Rauner for using your VETO power to stop HB2624. This is GREAT news for Illinois consumers who do not need coverage for preexisting conditions and who do not qualify for ACA (Obamacare) subsidies. Thanks to Governor Rauner (and President Trump) as of October 2, 2018, non-ACA qualified Short Term health insurance policies will once AGAIN provide consistent, uninterrupted coverage for up to 364 days (not just 90 days) and they will be renewable (for the first time ever) for up to 3 years! 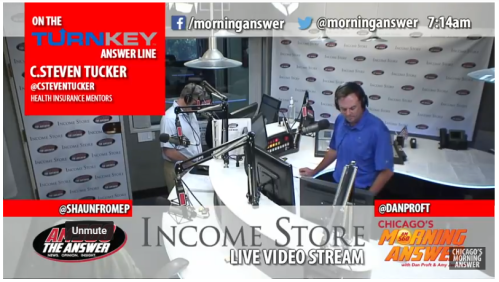 The  second regulatory change outlined in the final ruling is the expansion of AHPs – “Association Health Plans”. By “expansion”, this order refers to expanding upon the law that has regulated AHPs since 1974. That law is called ERISA – Employee Retirement Income Security Act. Traditionally, ERISA required AHP members to share a professional or other common interest in order to form an association and then offer health insurance benefits to members. Under the new final rule, those who enroll in AHPs after October 2, 2018 can purchase AHPs based on geographic location alone or by the traditional definitions of sharing a common profession or trade. And, new Associations can be formed solely for the purpose of offering health insurance to new Association members. This was heretofore prohibited.

Most importantly, unlike many of the traditional AHPs which offered substandard coverage resulting in multiple lawsuits. The new AHPs must provide many of the same consumer protections that ACA-qualified plans are federally mandated to cover such as keeping your child on your plan until the age of 26, covering preexisting conditions and including the same calendar year maximum out of pocket spending limits which are in place now for ACA-qualified plans. Those limits this year are $7,350 for an individual policy and $14,700 for a family policy.  The new AHPs also cannot impose annual or lifetime maximum coverage amounts which is a welcome improvement to traditional AHPs. AHPs that cover employers with at least 15 employees must also cover Maternity.

Even though all of the aforementioned consumer protections must be included with the new AHPs, they are not required to cover all 10 “Essential Health Benefits” that ACA plans are required to cover. So, if you need coverage for substance abuse disorders, mental health parity or pediatric dental and vision, you may still want to consider an ACA-qualified plan which may be much more expensive for those who do not qualify for federal health insurance subsidies. Either way more options are always better than less.