My evening with President Trump.

Here’s how my evening went at the Trump 2020 Victory fundraiser on Tuesday, June 25th at the Trump International hotel in Washington D.C. We arrived at the hotel which is GORGEOUS inside and out. See pic below:

As we were walking in, Mark Meadows and Jim Jordan were walking out. So, we of course told them how much we loved and appreciated them as they were getting into their car. Then we waited about 45 minutes until our wonderful POTUS walked in. Even though he was surrounded by Secret Service, he still took time to sign autographs. See that moment here.
Then, we entered the secure area where we were wanded by Secret Service and then given lanyards pictured below. 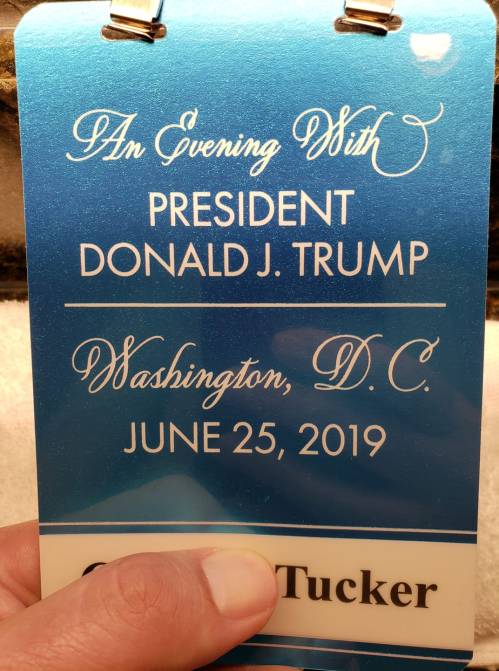 We were then told (much to our chagrin) that our phones had to be placed into these secure magnetized bags which were impossible to open until the evening was over. So, we couldn’t use our phones for the entire evening which meant NO pictures, unless of course I wanted to cough up another $13,800 ON TOP of the $12,200 I already donated. I just couldn’t justify that additional amount as much as I LOVE my POTUS. Not being able to take pictures REALLY sucked BUT later on, my new friend Sam Ukss realized that his “phone killer bag” was not working properly so he was able to snap the picture and capture the video below featuring President Trump, our new friend Deelip Mhaske, Jeannie and myself at our dinner table listening to our great POTUS speak. It’s not a long video but it is a video that I will treasure forever.

We were then directed down a flight of stairs where we dined on the most fabulous Hors d’Oevres like bacon wrapped scallops and other scrumptious things whilst also enjoying an open bar. Then, DJT Jr. and Kimberly Guilfoyle came into our room and gave two speeches about POTUS’s many accomplishments. As I listened, I realized that the diminutive man next to me was Lindsey Graham. Man is he TINY.
Anyway, it was at that moment while DJT Jr. was speaking that we heard someone yell from the floor above us over the railing “Don! Is that YOU?!” So, we all walked over to where the balcony overlooked us and leaning over was our great POTUS! See that moment here.
Shortly thereafter, these huge doors opened and we entered the grand dining room which had a bunch of tables draped with white clothes and on each plate was filet mignon, roasted potatoes, corn and peas and delicious raspberry cheesecake for dessert. It was the most elegant dinner I have ever consumed at a political fundraiser by far. There is NO rubber chicken at a Trump fundraiser. It was then that “half pint” (which is my new name for the shockingly diminutive Lindsey Graham) came on stage and gave a 15 minute speech about POTUS and his accomplishments and then out came our wonderful POTUS! Hoping the guy we sat with follows through and sends me the video so I’ll have a few minutes of that speech to share soon.
The ONLY good part of not being able to record anything is that POTUS was able to be himself. So he was HILARIOUS. At one point during his speech he said “with the tariff threat I was able to get Mexico to send 15,000 of their National Guard soldiers to their southern border to help stop illegals coming here. The FAKE NEWS said 15,000 is ‘nothing’. NOTHING?! That’s a f***ing army!” And of course the crowd began laughing loudly. He was cracking us up the whole time.
POTUS left shortly thereafter and after a LONG day which began at 5 a.m. we headed back to our hotel. Along the way, I snapped the picture below of the Washington Monument at sunset. Sometimes “the swamp” is actually beautiful.

It was definitely a once in a lifetime, historical moment. The first fundraiser for President Trump’s reelection campaign. That is WAY cool. He raised $6 MILLION that night. Of course I say ONCE in a lifetime because $12,200 is by FAR the most I have ever given to ANY politician and it sure as hell ain’t happening again. lol

I discussed my evening with the President on Chicago’s Morning Answer on 06/28/19. Click below to hear the replay.

4 responses to “My evening with President Trump.”